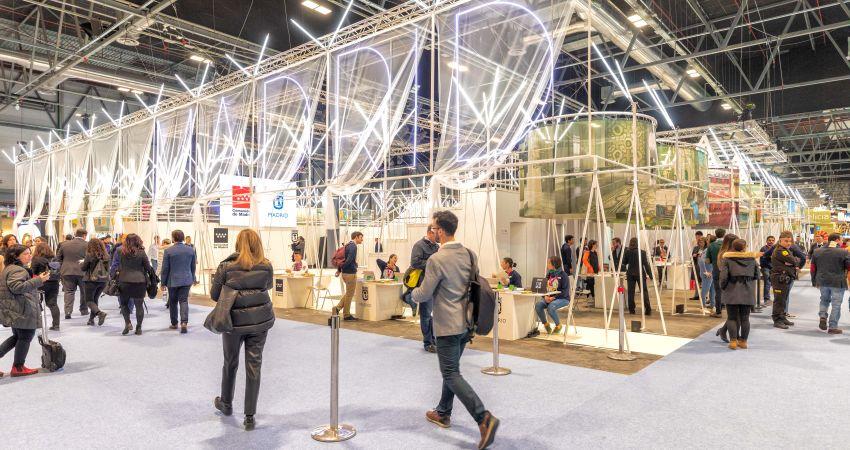 This year's International Tourism Fair, which marks the event's 40th anniversary will be held in Madrid at the IFEMA trade fair centre from 22 to 26 January, to showcase its commitment to cultural, accessible and quality tourism.

Madrid City Council’s stand, which is shared with the Community of Madrid in C05, Hall 9, brings together experience, culture and sustainability. The capital’s exciting atmosphere will be transferred to IFEMA in a space designed to resemble a city’s public areas, where, in its main streets and squares, the visitor will find Madrid’s most characteristic features. The stand’s distinctive feature will be a large façade that refers to the Gran Vía avenue as Madrid’s answer to Broadway and invites visitors to discover the shows, musicals, museums and all the rest of the city’s cultural offerings. Its construction has been designed to enable reuse of the stand’s components in other public spaces of the capital.

More than 100 reasons to visit Madrid
On Madrid City Council’s stand visitors to Fitur will find some proposals that are just a few of over 100 reasons why it is especially worth visiting the capital this year. They are part of the MADRID, SAVE THE DATE 2020 campaign, made possible by the public and private institutions present on the stand’s many displays. From the culture scene, the Prado Museum, the Reina Sofía Museum, the Thyssen-Bornemisza Museum and the Archaeological Museum will all be there to publicise their exhibitions and activities.

The Casa de Alba Foundation and the Palacio de Liria will be represented so that visitors can learn all about their art collections and historical archives, which can all be discovered in new guided tours. In addition, the Teatro Real (Opera House), La Casa Encendida and Caixa Forum are among the public and private institutions that will present their novelties to visitors this year.

The music scene and the great musicals that are part of the 2020 programme will be promoted by the musical productions -in Spanish- of Stage (The Lion King, Anastasia), Som Produce (Billy Elliot, La Cage aux Folles), Let’s go (Ghost, Adams Family, Dirty Dancing), Escrito en las Estrellas (The Doctor), El 33 and Poppy Entertainment (Aquellas pequeñas cosas by Joan Manuel Serrat), as well as the MAD Cool and Tomavistas Festivals.

The city’s culinary offerings will be represented at this year's Fitur, by Gastrofestival, which will be held for the 11th time from 7 to 23 February, and by the city's wide range of shopping options. Moreover, the tourist information staff at the Madrid stand will offer full details about the city's sports, cultural and leisure activities.

Congress tourism will be represented by the Madrid Convention Bureau (MCB), an agency affiliated with Madrid Destino and the Culture, Tourism and Sports Department of the City Council, which is responsible for positioning the Spanish capital at the top of international meeting tourism destinations. MCB’s activity has helped Madrid win important international awards, such as the as 'World's best destination for meetings and conferences' at the 26th annual World Travel Awards 2019 (WTA).

Fitur Screen and Fitur Gay (LGBT+)
Madrid City Council will also participate in Fitur Screen, the platform that connects the tourism and film industries, which is being held for the second time. In a space shared with the Community of Madrid, in Hall 4, stand FS10, the Council’s City of Madrid Film Office will present the new brochures aimed at promoting audiovisual tourism in the city. One of the novelties is the Madrid, capital of series brochure, which offers information and a map with the most iconic locations of the most successful current Spanish series, as well as series from the past.

Visitors to Madrid City Council’s stand at Fitur Screen will also find other informational materials such as the Amodóvar’s Madrid and Arde Madrid itineraries.

The capital will also be represented in Fitur Gay (LGBT+), in Hall 3, stand 3B19-3B29, where the wide offerings for this group with the most important events in the city, such as the Gay Pride Events.

Landing Madrid
Landing Madrid will also be held for the second time at Fitur this year; this is a festival that turns the capital into the stage for showcasing audiovisual tourism campaigns. During the fair, two workshops will be held on topics such as music in travel videos or digital ecosystems and creativity.

Moreover, the FITUR Film & Video Competition awards, a competition organized by Madrid City Council through Madrid Destino, will be held, together with the CIFFT (International Committee of Tourism film Festivals) and Terres Travel & Landscape Communication with the collaboration of Fitur. The competition honours videos or films focused on the promotion of tourist destinations, services and products of the fair’s Exhibitors and Co-exhibitors.

Sustainable, accessible and quality tourism
Madrid City Council has been taking different actions aimed at moving towards a people-oriented, sustainable, accessible and quality tourism model. Among these initiatives are proposals aimed at promoting issues such as accessibility and gender equality. Accordingly, during Fitur, the Easy Reading Guide to Madrid will be presented and a round table will be held under the title Women who build destinations, which will offer a vision of the past, present and future challenges faced by Madrid as a tourist destination, as seen from a female perspective.

Initiatives that will continue this year to recognise the role played by tourism professionals in improving the sector and promoting Madrid’s uniqueness and values include awards such as the Madrid Acoge Prizes, the Prize for the Best Guided Tour or the Hermestur Prize, which will be given during the fair.

These initiatives are all part of the actions aimed at improving the sustainability of Madrid’s tourism model, and they include projects that will continue and some that will be implemented for the first time to improve the environmental impact of the tourist offices activities and the redirection of tourist flows within the city by orienting them to new, lesser known areas that are potentially highly attractive to tourists.

5:00 p.m.: Award ceremony at which the 20th annual HERMESTUR Prize and the 11th annual MADRID ACOGE Prize will be bestowed, in collaboration with the Spanish Association of Tourism Professionals (AEPT).

4:00 p.m.: The Prize for the Best Guided Tour will be awarded for the second time, in collaboration with the Professional Association of Tour Guides of Madrid (APIT).

10:30 a.m.: Madrid Day will be celebrated on 24 Friday and will feature a musical performance of the Aquellas pequeñas cosas musical by Joan Manuel Serrat