Skip to main content
Working in collaboration with the Prado, Thyssen-Bornemisza and Reina Sofía museums, a campaign has been developed to encourage visits to all three art galleries

The City Council gets behind promoting Madrid’s Paseo del Arte 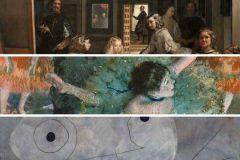 Madrid City Council is putting the spotlight on one of its major tourist attractions, the Paseo del Arte (Art Walk). This morning, the mayor of Madrid Manuela Carmena, and representatives of the Prado, the Thyssen-Bornemisza and the Reina Sofía (MNCARS) museums, presented a series of initiatives implemented by the Madrid Destino Tourism Department to encourage people to visit all three art galleries.

The three museums are very near each other and together make up one of the world?s foremost concentrations of artwork. It is one of Madrid?s cultural tourism hubs. These institutions are the essence of Paseo del Arte, which is also home to leading cultural venues including CentroCentro, CaixaForum Madrid, Medialab-Prado, Mapfre Foundation, the Naval Museum and the Decorative Arts Museum.

The aim of the new Essential Art Walk campaign is to encourage people in strategic international markets, especially those a long distance away, to visit the three leading museums on Madrid?s Art Walk. To make it even easier, the three museums offer an Art Walk Pass, a single ticket that gives holders a 20% discount and preferential entry to each museum.

This promotional action, which includes the development of the ?Essential Art Walk? app, the publication of a promotional guide and information leaflet, an open-air exhibition and advertising campaign, has been made possible thanks to the agreement entered into by Madrid City Council, through the Madrid Destino Tourism Department, and the Prado, Thyssen-Bornemisza and Reina Sofía museums. An alliance that opens the door to future collaborations and initiatives for disseminating the tourism-related and cultural aspects of Madrid?s Art Walk.

The ?Essential Art Walk? app
The app includes a selection of eight works that represent the collections held at each museum and also explains how to go about purchasing the Art Walk Pass. Users can read about the 24 paintings featured as well as enjoy an audio tour of these works, available in nine languages: Spanish, English, French, German, Italian, Portuguese, Russian, Mandarin Chinese and Japanese.

Those who wish to download the ?Essential Art Walk? app can do so free of charge via Madrid?s official tourism website, esMADRID.com (http://www.esmadrid.com/en/paseo-del-arte-essential-app). The app is compatible with both iOS and Android devices and can also be downloaded from Google Play and the Apple Store, as well as through the three museums? online channels.

24 masterpieces of art
Each museum has selected eight pieces that stand out for their importance in the history of art and are significant within their respective collections. A total of 24 essential works of art.

A brief anecdote about either the work or the artist accompanies the description of each one of the paintings.

Bilingual printed guide
The dissemination of information about the app is supported by the publication of a bilingual guide. Published in both Spanish and English, it features a description of all 24 artworks and interesting facts about each museum. This guide will be distributed during promotional events carried out by Madrid Destino and the museums themselves. A leaflet containing information about the app has also been printed in nine languages, which will be handed out at national and international trade fairs, congresses and city events, as well as at tourist information points across the capital.

Open-air exhibition
For the enjoyment of visitors and local residents, an exhibition has been set up along the central reservation of Paseo del Prado, comprising 14 structures that show the 24 works included in the app. The exhibition opened today and can be visited for a month, although this period could be extended.

International advertising campaign
The Madrid Destino Tourism Department has also designed an advertising campaign aimed at people visiting Madrid so they can download the app and discover one of the city?s top cultural attractions. It is especially targeted at faraway countries like Japan, China, the USA, Brazil, Russia and Middle East destinations. The app will also be promoted in Portugal, France, Germany, Italy and the United Kingdom./