Skip to main content
Through the Madrid Destino Tourism Department, the capital will participate in a new edition of the international fair from 18 to 22 January at Ifema 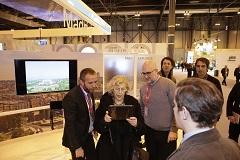 The city of Madrid?s most notable attractions and tourist developments will once again be featured at Fitur. Through the Madrid Destino Tourism Department, Madrid City Council will participate in the 37th edition of the International Tourism Fair, which will be held at Ifema from tomorrow the 18th to the 22nd of January. The capital city?s stand, which it will share with the Community of Madrid once again, will be located in Hall 9, c03.

In this edition the city of Madrid will give a special nod to one of its main tourist attractions, Plaza Mayor, which celebrates its 400th anniversary in 2017, and a large picture of the square will surround the stand?s main stage. In the vicinity, throughout the duration of the fair an artist will produce illustrations of Madrid, mainly of the square. In addition, the structure of the stand ?which is fully accessible? will feature various arches simulating the arcade of the square, which is located in the heart of Hapsburg Madrid.

The latest technology
The design of Madrid?s stand will make use of the latest technology, enabling more effective communication of all that Madrid has to offer tourists. A frieze of LED panels will span its perimeter, projecting tourism marketing claims and highlighting major events in the city?s calendar: there will be a state-of-the-art LED central panel showing videos promoting tourism and other promotional content as well as panels at each themed desk showing thematic content and content provided by co-exhibitors. In addition, LED curtains will envelop the stand, imitating Madrid?s sky.

Virtual observation deck offering views of Madrid
This year Madrid?s space at Fitur will feature a virtual observation deck simulating the Faro de Moncloa tower. The semicircular zone resembles the tower?s information panels, which are designed in the shape of a guardrail, and it will enable visitors to experience the various 360º views offered by the tower. With the aid of a tablet, visitors will be able to view several points around the city as well as Madrid?s mountains, while a screen located behind the guardrail will enable them to enjoy the same views that users can see with the tablet.

Digital tourist information system
For the first time ever, and exemplifying the advances implemented in Madrid?s tourist information centres and offices this year, tourist information agents will use tablets and apps to assist industry professionals and visitors at the stand. With the aid of these digital tools they will be able to provide more information, drawing from a database of 4,500 entries and a calendar of over 6,000 annual events as well as a digital map block enabling them to offer information pinned to a specific map location.

Themed desks
Madrid?s stand at Fitur will feature five themed desks that will present the destination?s main tourist attractions. One of these will be devoted to Madrid?s museums and will feature the three most important galleries along the Art Walk: the Prado, the Thyssen-Bornemisza and the Reina Sofía. The desk will also promote Essential Art Walk, an application recently launched in a joint initiative by these museums and Madrid. The tool provides information, in nine languages, on 24 masterpieces found in the museums? collections, as well as information on other cultural institutions such as CaixaForum Madrid and the eight state museums located in the city, presenting their most notable holdings.

Gastronomy, another of Madrid?s main attractions, will also be featured in a dedicated space that will promote the capital?s major culinary event, Gastrofestival Madrid, which will be held from 21 January to 5 February. The space will also host gastronomic activities such as cooking demonstrations and will present the most notable culinary creations to be found in the destination of Madrid.

Under the name Más Madrid (More Madrid), another desk will showcase a selection of Madrid?s tourist attractions which add particular value to the capital as a destination. The space will feature the presence of cultural entities like La Casa Encendida, the Mad Cool festival and Madrid?s five house-museums (the National Decorative Arts Museum, the Cerralbo Museum, the Museum of Romanticism, the Sorolla Museum and the Lázaro Galdiano Museum), which have put together a tourism product to promote an alternative cultural tour of the city, via initiatives and activities offering visitors a different cultural experience.

Finally, there will be a zone devoted to one of the city?s most notable cultural institutions, Teatro Real. Beginning last year and until the end of 2018, Madrid?s opera house will be commemorating ?both at national and international level? the 200th anniversary since its creation in 1818, as well as the 20th anniversary of its reopening in 1997 following a complex and groundbreaking architectural remodelling.

Madrid LGBTI
This year Madrid will play host to the world?s largest LGBTI event, WorldPride, which will take place from 23 June to 2 July. In view of this the capital will have its own space in Fitur Gay, where it will present the LGBTI-specific attractions offered by Madrid as a destination as well as information on WorldPride.

Ceremonies
Madrid?s stand at Fitur will host various institutional ceremonies, including the presentation of the Hermestur and Madrid Acoge awards. Given out by AEPT (the Spanish Association of Tourism Professionals), the Hermestur Award recognises associational and professional endeavours while Madrid Acoge recognises the professionalism of people with ties to tourism who receive travellers with warmth and kindness.

Madrid?s stand will welcome Their Royal Majesties the King and Queen of Spain, who will pay it a visit, and will also host the celebrations surrounding Madrid Day and various professional meetings and leisure activities over the five days of the fair./