Gastrofestival, 10 years giving you a taste of Madrid 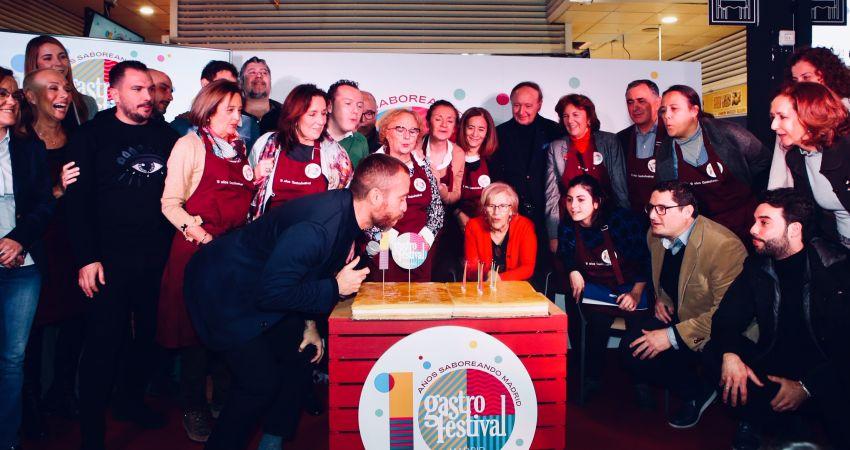 The tenth edition of Gastrofestival Madrid, the gastronomic and cultural festival organised by the City Council's Tourism Department and Madrid Fusión, will begin on 23 January. More and better culinary and cultural offerings than ever before will be the main ingredients in a special programme “cooked up” by over 400 public and private companies and institutions that can be savoured and enjoyed until 10 February.

The programme, which will feature its regular categories (Gastronomic Madrid, Gastroculture, Sensorial Experiences, Wine Culture, Gastrofashion, Gastrohealth and Gastrofestival Solidarity), will also include two exciting new additions: a cookbook of recipes from some Madrid homes and the section Gastrofestival Recommends.

Madrid Housewives’ Cookbook
As a tribute to housewives and to showcase the culinary tradition and gastronomic diversity of Madrid’s homes, a book has been published featuring 20 home-cooked recipes provided by residents of the city. Twenty in total, from cocido madrileño (Madrid chickpea stew), old-style cod and Grandma Magdalena’s chicken in pepitoria (almond and egg) sauce to Japanese strogonoff, grouper ceviche in rocoto pepper sauce and Shish Barak– are illustrated with a brief history of the dish and its chef.

Each recipe in the cookbook –which even includes a recipe for chicken curry contributed by Madrid’s mayor, Manuela Carmena– is associated with a particular municipal market. The book also includes a list of the 46 municipal markets in the capital's main districts, where shoppers can purchase the finest ingredients and a wide range of items at excellent value for money. The cookbook can be downloaded here: www.gastrofestivalmadrid.com/recetario.

Activities in restaurants, markets and other gastro venues
As in previous editions, restaurants, cocktail bars, cooking schools, gourmet and homeware shops, museums, art galleries and fashion retailers from the city of Madrid will showcase the value of Madrid’s culinary offerings and pay tribute to gastronomy via artistic disciplines such as painting, literature, music, film, theatre, photography, design and fashion.

Under the umbrella of Gastronomic Madrid, in addition to the new Gastrofestival Recommends section, attendees will also be able to enjoy experiences such as Mahou Five-Star Menus (special set menus from 25 to 40 euros), Degustatapas (a tapa and a small bottle of Mahou for 3 euros), Rioja Wine in Our Favourite Bars (a tapa and a glass of Rioja for 6 euros), Gastrobocatas (signature bocadillos, or baguette-style sandwiches), Four-Hand Dinners (a combination of talent in which Spanish chefs open their kitchens to top international chefs) and Madrid Gastro Classics courtesy of Priceless Cities (exclusive set menus at La Tasquita de Enfrente, Las Tortillas de Gabino and Viavélez), in addition to special offerings at cocktail bars, shops and culinary routes (Route for the Sweet-Toothed, Breakfast at…, Coffee Route, cooking schools and gourmet shops).

Once again, Madrid’s markets will also be taking part, offering all sorts of activities such as gastronomic workshops, classes, food and wine tastings, pairings, special set menus and other gastronomic experiences.

Cultural offerings
The Gastroculture section will offer the most original initiatives, giving us a chance to delight in the cultural side of gastronomy. For this edition, the Museum of Romanticism will organise a tour that will give us a look at 19th century culinary customs, as well as a workshop where we can cook recipes from the period. The National Museum of Natural Science will pay tribute to Charles Darwin with the activity “Eat up the Museum” (“Cómete el museo”), which includes the Spanish-language tour “If it runs, swims or flies, throw it in the pot”, while the Thyssen-Bornemisza will offer a gastronomy-themed tour of its collection.

The Silo de Hortaleza will take part in Gastrofestival’s programme for the first time with a guided tour through the old quarter of the district of Hortaleza that will end with a tasting of its three most typical culinary products –lamb chops, asadillo (roasted red peppers and tomato) and Garnacha wine– as well as a theatrical performance at its observation point. The Silo will also offer an exhibition of photographs, with a special focus on the restaurant El Garnacho.

Another of the major cultural venues participating for the first time in this edition is Palacio de la Prensa, which will pay tribute to filmmaker Pedro Almodóvar with screenings of two of his films linked in some way to gastronomy. Who could forget the ham bone in What Have I Done to Deserve This? or the gazpacho in Women on the Verge of a Nervous Breakdown? Audience members at both screenings will receive a pack that includes ham, gazpacho, Spanish omelette and nuts. The venue will also host a performance of the monologue “El Chef”, a cooking master class that lies somewhere between gastronomy and comedy.

Further cultural offerings at Gastrofestival will be organised by the bookshop Cervantes y Compañía, where participants can explore the British countryside’s Georgian period with “Dining with Jane Austin” (held in Spanish), as well as the bookshop De Cuento, where children can use cake, chocolate and sweets to build houses in true Hansel and Gretel style, and the National Music Auditorium, whose “Bach Vermut” series will include a performance by David Briggs in an organ concert featuring improvisations for silent films.

Sensorial Experiences, Wine Culture and Gastrofashion
In addition to classes for both children and adults, as part of the Sensorial Experiences section Mercamadrid will hold gastronomic workshops at Mercamadridlab, a new space where visitors will be able to participate in a master class where they’ll design, make and ultimately eat their dishes.

Oenology enthusiasts and lovers of fine wine will find the best offerings in the Wine Culture category, with food and wine tastings and pairings. Also, in a masterful combination of fashion, design and gastronomy, Gastrofashion will offer new activities such as a tour of Casa Decor through “the kitchens of the future”, where visitors can discover the latest trends in kitchen furnishings, materials and wall and flooring options, as well as a ceramic painting workshop using Abe the Ape crockery.

Gastronomy and health and Gastrofestival Solidarity
To explore the health-related aspects of gastronomy, the Gastrohealth section will feature its traditional healthy menus and a list of restaurants suitable for people with coeliac disease. In this edition, the Institute of Food Science and Nutrition (ICTAN) will organise workshops focusing on foods and components like coffee, oil, fibre, water and chocolate. The last of these will enjoy pride of place at The Patissier with the “Chocolate Experiences”: three participative, heavily sensorial installations that will contemplate cocoa from other points of view.

In addition, solidarity and cooking will come together in Gastrofestival Solidarity, which will feature the participation of several restaurants that work with the NGO Acción contra el Hambre (Action Against Hunger) with the aim of achieving a world where there’s food for everyone.

Sponsors
The tenth edition of Gastrofestival Madrid, sponsored by Mahou San Miguel and Mastercard, is organised in collaboration with Madrid’s markets and features the participation of JCDecaux, Iberia Express and La Casa del Libro.

Check out the full programme on the festival’s official website:  https://www.gastrofestivalmadrid.com./