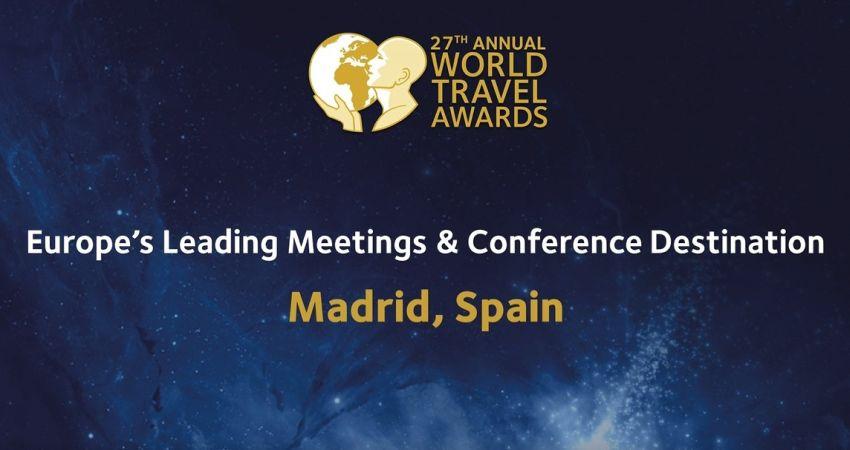 The city of Madrid has once again been recognised as Europe’s leading meetings destination. For the third year running, the Spanish capital has been victorious in the ‘Europe’s Leading Meetings & Conference Destination’ category of the 2020 World Travel Awards. The awards of this 27th edition were presented yesterday in a virtual ceremony.

This new recognition is a reflection of how Madrid is perceived by professionals in the international MICE (Meetings, Incentives, Conferences and Exhibitions) industry, who have chosen Madrid’s meetings tourism offering over that of other destinations, such as Copenhagen, Barcelona, Vienna, London, Paris and Berlin.

Following its victory in the European section of the World Travel Awards, Madrid will now compete for the world title in the Grand Final between the winners of the Europe, Middle East, Asia, Latin America, Africa, Indian Ocean, North America and Oceania editions. This award, which Madrid won last year, will be announced in a ceremony in late November.

A fundamental pillar of the tourism model
As the city councillor responsible for tourism, Almudena Maíllo, states, ‘meetings tourism is one of the fundamental pillars of Madrid’s tourism model. We are going to continue working to secure the city’s place as a global benchmark in the meetings tourism industry. The achievements made in this sector have always been tremendous, even more so in the last few months, and we know that this will help Madrid to be ready for when the situation returns to normal’.

Madrid City Council, through Madrid Convention Bureau (MCB), is committed to ensuring that Madrid continues to be an international benchmark in this segment. Another key element of this model in terms of both expanding the city’s tourism sector and stimulating recovery from the crisis generated by the COVID-19 pandemic is public-private partnership.

Accordingly, this new honour also recognises the hard work and investment and professionalization activity of the public and private organisations whose commitment and efforts in recent years have made it possible for Madrid to be at the forefront of the global MICE tourism industry. This partnership is constantly nurtured by the city council’s tourism department and MCB, the organisation within the municipal company Madrid Destino that specialises in the promotion of Madrid as a location for professional meetings.

New actions spearheaded by the industry
Within this collaborative approach, the new promotional and communication actions that Madrid Convention Bureau is designing are fully supported by and will involve its more than 200 associated companies, which represent all the industries involved in Madrid’s business tourism. They will play a fundamental role in this plan, whose actions range from promotions at local markets with the voluntary sector to sector-wide meetings and training sessions on preventive measures, in addition to the launch of an international promotional video made in conjunction with the industry.

These activities, which were proposed at the assembly of associated companies on October 5, and Madrid’s participation in this awards ceremony are unique opportunities to publicise how the city has adapted to the COVID-19 situation by creating a safe environment for its visitors in the meetings and events segment and to restore traveller confidence.

The Oscars of the Tourism
The World Travel Awards were established in 1993 to recognise the excellence of the various key sectors of the travel, tourism and hospitality industries. The annual programme of the awards, known as the ‘Tourism Oscars’, is recognised as the most prestigious and most comprehensive in the global industry. Its ceremonies are considered to be highlights of the professional tourism calendar.