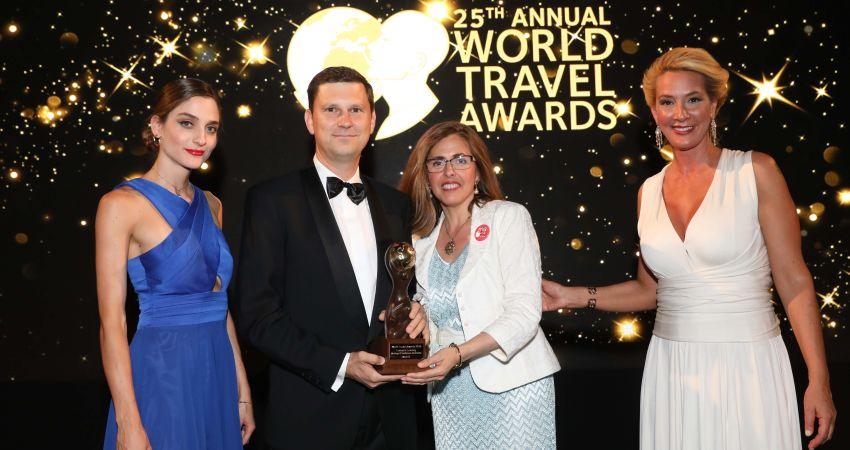 The city of Madrid has been recognised as Europe’s leading MICE tourism destination. The capital took first place in the category “Europe’s Leading Meetings & Conference Destination” at the World Travel Awards (WTA), which are considered the “Oscars” of the tourism industry and celebrate their 25th anniversary in 2018.

The award entails further recognition for Madrid, from professionals linked to the international tourism sector and members of the public with an interest in travel, whose votes conveyed their esteem for the destination of Madrid’s MICE tourism amenities (Meetings, Incentives, Conventions and Exhibitions), ranking it above other European capitals like Paris, Vienna, London and Berlin. These capital cities were selected, along with Madrid, as the category’s finalists by a panel of experts in March. The award ceremony was held on Saturday 30 June in the Greek city of Athens. David Noack, Director of Madrid Convention Bureau (MCB), took part in the event, representing Madrid City Council's Tourism Department.

Receiving this award will enable Madrid to compete at the global level against the winners of the same category of the World Travel Awards in the regions of the Middle East, Asia, Latin America, Africa & the Indian Ocean and North America & the Caribbean. This November at the WTA's Grand Final Gala Ceremony, to be held in the Portuguese city of Lisbon, we will find out if Madrid has also been chosen as the best meetings and conference destination in the world. The Emirate of Dubai, which won in the region of the Middle East, is the only one of the Spanish capital’s competitors that has been announced so far.

Professional meetings of this nature increase the city’s prestige among associations and event organisers, who choose Madrid to ensure the success of their events. Some of these organisations have repeatedly placed their trust in the capital, such as the World ATM Congress, which has held its annual congress in the city since 2013, and ESMO, which held its congress in Madrid in 2014 and 2017 and will do so again in 2020. All of this highlights the fact that the award is well-deserved.

Both public bodies and the private sector have spent over 30 years working, investing and professionalising the industry to demonstrate that Madrid is one of the MICE sector’s leading destinations. Their shared objective is to position the Spanish capital as one of the world’s top MICE tourism destinations.

Over 200 companies are affiliated with MCB, representing all of the business sectors involved in MICE tourism in Madrid. Every year MCB undertakes some 30 international promotional activities, in collaboration with affiliated companies, to present and to strengthen the image of Madrid as a venue for professional meetings.

World Travel Awards
Since 1993 the World Travel Awards have rewarded excellence in all of the key sectors of the travel, tourism and hospitality industry. On a global level, the awards are considered a stamp of excellence in the tourist industry. The entire world is encompassed at each annual edition in the Grand Tour, a series of regional gala ceremonies that recognise quality on each continent and culminate with the Grand Final Gala Ceremony./