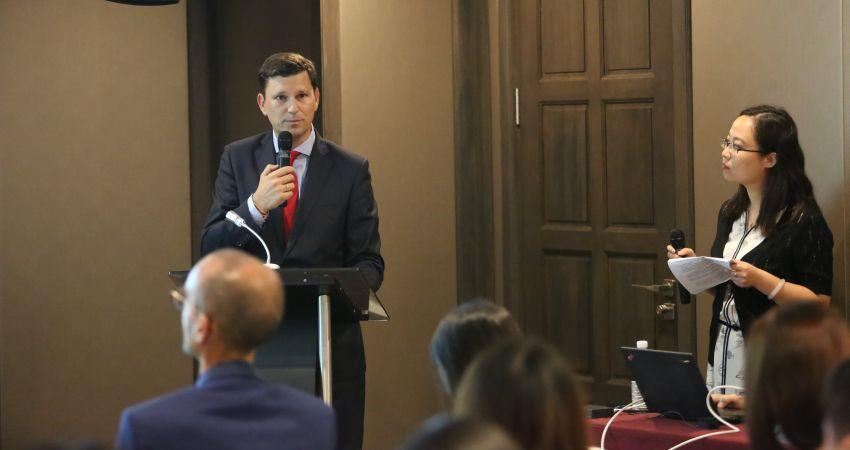 Strengthening the city of Madrid’s image as a leading destination for business tourism from China is the primary objective of the promotional activities carried out by Madrid City Council’s Tourism Department this week in two of the Asian country’s main cities. Through Madrid Convention Bureau (MCB), it will hold two events to present the destination of Madrid in Shanghai (today, at Meliá Shanghái Hongqiao Hotel) and in Beijing (19 September, at Velvet, the restaurant owned by Madrid-born chef Rodrigo de la Calle).

The presentations will be aimed at fifty Chinese companies and agencies with a potential interest in holding their business events in the Spanish capital, as well as at specialist reporters who will raise awareness of Madrid’s attractions as a destination for professional meetings and incentive trips. The venues, hotels, transport infrastructure and all of the latest developments in Madrid’s tourism sector will be presented. Presenters will also take the opportunity to introduce the destination of Madrid’s new graphic icon, whose main feature is a hug that represents one of the hallmarks of the city: its hospitality and its welcoming nature.

To enable it to offer the best information on the destination of Madrid, the City Council’s Tourism Department will be supported at the roadshow by 11 companies and institutions associated with MCB which exemplify the quality and diversity of Madrid’s tourist offerings: the hotels Ilunion Atrium and Meliá Castilla, the DMCs Cititravel, Exclusive Spain Tours and Premium Incoming, the special venues The Glass Gallery at Cibeles palace and the Thyssen-Bornemisza Museum, the PCO Kenes Group, the transport company Grand Class and service providers such as El Corte Inglés and Las Rozas Village.

With this initiative, Madrid joins the ranks of the cities viewed by Chinese meeting and incentive trip organisers as potential destinations for major professional meetings. It also strengthens its international image as a MICE (Meetings, Incentives, Conventions and Exhibitions) destination and promotes the creation of opportunities and networking for MCB’s partners.

Institutional collaboration
This trip to the Chinese cities of Shanghai and Beijing was made possible by the support of the Turespaña Tourism Office in Beijing, in addition to the collaboration of the airline Iberia, which will enable four of the professionals who take part in these events to visit Madrid in the near future to discover the capital in person with a comprehensive programme of activities featuring the participation of the companies from Madrid present at the roadshow.

Chinese market
According to the World Tourism Organization (UNWTO), China is one of the world’s largest outbound tourist markets, and although Spain still doesn’t rank among its top three destinations, growth in the number of Chinese tourists who visit our country has been above 30% for at least nine years. Based on this trend, it is expected that by 2020 one million Chinese tourists will be arriving each year.

China was the outbound international tourist market that showed the most growth in 2017 in terms of the number of tourists arriving in Madrid: 21%, according to the Hotel Occupancy Survey conducted by the National Statistics Institute (INE). The capital received 150,333 visitors from the Asian country, with 300,000 overnight stays recorded. The most notable trait of Chinese travellers is their high per capita expenditure, calculated at roughly 1,400 euros, compared to 743 euros for other foreign tourists (source: Globalblue).

With respect to the MICE segment, the aim is to attract large-scale Chinese incentive trips like the one organised by the company Tiens in 2016, which brought its 2,400 employees to Madrid. The trip entailed an initial capital investment valued at 20 million euros at that time.

New promotion tools
In order to have more and better tools at its disposal to analyse this market, Madrid Convention Bureau is currently creating a Chinese outbound MICE tourism guide, which it will present this autumn.

Moreover, conscious of the potential of this market and in view of the stimulus entailed by the launch of the latest air transport links to Chinese destinations, it is investing in improving the promotion tools aimed at the Chinese market. To this end, MCB’s website (https://www.esmadrid.com/mcb/) is being translated into Chinese, the first of a number of adaptations planned. It is also translating the application “Madrid, Meeting Destination” and working on the production of new promotional videos./