Skip to main content
Madrid's mayor unveils a new organisation representing a joint public-private management model in which the local City Council, the regional government and the tourism sector all have a stake 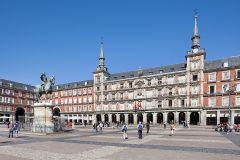 The tourism sector is crucial to Madrid's economy. It represents 7.1% of GDP and 150,950 jobs. 90,570 (60%) of these jobs are directly created. Last year over eight million tourists chose Madrid as their destination, setting a new record. In order to consolidate and improve these figures, two tools have been launched in the form of a public-private collaborative endeavour to drive growth: Asociación Turismo Madrid, which is a new management model for Madrid as a tourist destination, and a 5-Year Strategic Plan. The local City Council, the regional government and companies in the tourism sector have joined efforts to achieve some very specific goals: increasing the flow of tourists by 30% and improving hotel occupancy rates, increasing tourist spending by 50% and cutting seasonality by 20%.

Today, alongside Ana Isabel Mariño, the regional Minister of Employment, Tourism and Culture, Rafael Arias Salgado, the chairman of the new organisation, and various business representatives, Madrid's mayor Ana Botella presented Asociación Turismo Madrid and the 2015-2019 Strategic Plan for Tourism in Madrid, in which the local and regional governments and the private tourism sector all have a stake. "Today we can say", she stated, "that tourism in Madrid has reason to celebrate and that once again we will achieve or even surpass the record number of visitors we received last year."

Asociación Turismo Madrid is a new management model that embodies the collaborative efforts that have already been in place between Madrid's City Council, its regional government and private companies for the past two years. It is also, as described by Botella, "a definitive step towards relaunching the Madrid Brand and attracting tourists to the city."

The public and private sectors hold respective stakes of 49% and 51% in the organisation, which represents a new model. It has a Board of Directors led by Rafael Arias Salgado, who sits as honorary chair. The Board will have a maximum of 20 members: two representatives from the Madrid City Hall, two from the regional government, one from the Chamber of Commerce and up to 15 from private sector affiliates, which currently include Alsa, Value Retail, El Corte Inglés, Iberia, NH, Meliá, Real Madrid, Atlético de Madrid, AC Hoteles, Hoteles Barceló, Mahou, Ifema and Madrid Network.

Strategic Plan
Asociación Turismo Madrid has been created with the initial goal of drafting the 2015-2019 Strategic Plan for Tourism in Madrid. This new, coordinated endeavour between the local City Council, the regional government and Madrid's tourism industry will help to establish Madrid as one of the most visited capital cities in Europe, to achieve a greater balance between national and foreign tourism and to drive hotel occupancy above 65%.

The image conveyed of Madrid as a destination will centre around six key points. Amongst these are the city?s historical and cultural heritage, including some of the world's top museums, the appealing number of things to see in its surrounding area, its varied and top-quality cuisine, the internationally important events and performances hosted by the city, its top-level football matches and the Spanish spirit and traditions seen throughout Madrid.

The aim of this strategy is to increase the attractiveness of Madrid as a destination for short getaways or city breaks, for tours combining Madrid with other Spanish cities and for business tourism.

The mayor called the strategy an approach "that is, in short, aimed at maintaining and strengthening the change in trend seen in 2014 in order to allow tourism in Madrid to continue to grow sustainably, not only in quantitative terms but also in a qualitative sense."

She explained that there is, in her belief, "no better way of starting off 2015 than with a Strategic Tourism Plan and a new tourism management model tailored to the specific needs and requirements of Madrid as a tourist destination, a work model inspired by the management models used by the top tourism destinations and organisations around the world."

The Strategic Plan has been created following extensive analysis of Madrid's situation in regard to tourism undertaken by the sectors involved and including multiple meetings with experts from sectors such as the entertainment, culinary, shopping, culture and accommodation sectors, in addition to airlines and operators involved in organising conas./