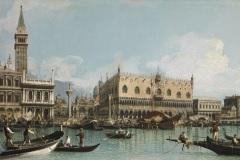 This morning what is set to become the blockbuster exhibition of the season, the Abelló Collection, was presented at CentroCentro Cibeles. Present at the occasion were José Tono Martínez, the centre?s director; Felipe Garín Llombart, the exhibition curator;  Enrique Gutiérrez de Calderón, the project manager; and Francisco Bocanegra, the architect responsible for the show?s design and layout.

Organised and produced by CentroCentro Cibeles as part of the ?Mecenazgo al servicio del arte? (Patronage at the Service of Art) series, the exhibition opens to the public on Thursday 2 October and can be visited until 1 March 2015. It is sponsored by Mastercard Priceless Madrid.

?This is a unique opportunity to admire one of the most important private art collections in the world, and, furthermore, it is an ambitious project which establishes CentroCentro Cibeles as a foremost institution on the Art Promenade,? said Tono Martínez, the centre?s director. He also thanked Juan Abelló and Ana Gamazo for generously lending the pieces for the exhibition free of charge. ?Patronage of the arts is a fine example of civic engagement; we must acknowledge the work patrons do and the time and resources they employ to preserve an important part of our heritage,? said Martínez.

The husband and wife team will donate any profits to the charity Cáritas Madrid.

?Upon visiting the exhibition, visitors will appreciate the owners? passion for art and history, having undertaken over the last few decades the important task of recovering unique artworks from Spain?s historical heritage wich had been taken out of the country? explained the curator. ?These include Salvator Mundi entre San Pedro y San Juan (Salvatore Mundi between Saint Peter and Saint John) by Fernando Yáñez de la Almedina; El olfato (Allegory of Smell) by Ribera; La familia de la Virgen (The Family of the Virgin) by Zurbarán; and (El joven gallero The Young Fighting Cock Trainer) by Bartolomé Esteban Murillo.?

The collection is one of the first to take an interest in the work of artists who are underrepresented in Spain, ranging from the vedutisti Canaletto and Guardi to Francis Bacon and other key figures of the historical avant-garde movements.

This leading-edge spirit defines another of the characteristics of this collection: its predilection for works on paper, sketches and drawings, a genre that up until the last few decades was not particularly well regarded by private collectors. ?Ranging from Francisco Pacheco, Pedro de Campaña and Bartolomé Murillo (with the acquisition of the Álbum Alcubierre), to a wide selection of works by Picasso, Van Gogh, Schiele and Bacon, among others, the exhibition offers a unique journey through the history of drawing, in parallel to that of painting," explained the curator.

The show begins with a tribute to El Greco on the fourth centenary of his death, with the work La estigmatización de san Francisco (The Stigmatization of St Francis).

This is followed by the first room The Town and Court of Madrid, a tribute to Madrid with several large-scale canvases reflecting scenes from the capital from the 17th to the 19th century. In this introduction to the exhibition, works from Madrid?s 17th century School of Painting can be seen alongside pieces by Giuseppe Canella including Vista de la Carrera de San Jerónimo (View of La Carrera de San Jerónimo) and Vista del Paseo del Prado con el Museo del Prado (A View of the Paseo del Prado with the Prado Museum), among others, and La Fuente de Cibeles (The Cybeles Fountain) by David Roberts. Together they produce a curious reality-fiction effect given that the real-life places and monuments depicted in the paintings can be found outside just a few metres from the exhibition room.

The next room, From the Gothic to Humanism, takes us through the 15th and 16th centuries with works by Bernardo Serra, Jaume Baço Jacomart, Juan de Flandes, el Maestro de Artés, Pedro Berruguete, and Lucas Cranach, an artist much favoured by Abelló. According to the curator this room also holds ?one of the greatest visual pleasures of the exhibition?, the Salvatore Mundi between Saint Peter and Saint John by Fernando Yáñez de la Almedina, widely regarded as a masterpiece.

The third room, When Man Turned Nature into Art, displays works from the 17th century, with oils and drawings by José de Ribera, Bartolomé Esteban Murillo, Francisco Pacheco and Francisco de Zurbarán. Creating what the curator describes as ?an almost magical space?, it offers a complete series of still-lifes and vases by the most representative and renowned artists of the 17th century, works highly valued by their owners. These include Miguel de Pret, with one of his rare signed pieces, Bernardo Polo, Juan de Arellano, Pedro Camprobín, and Antonio Ponce with his masterpiece Bodegón con jarrón de Talavera con flores, alcachofas y frutas(Still-life with Talavera Vase with Flowers, Artichokes and Fruit).

The Vedute, Goya and His World is the name of the fourth room, which takes us to the 18th century. Besides other works, this room displays masterpieces by Canaletto and Guardi as well as canvases by Antonio Joli, demonstrating how the Italian style of the mid-eighteenth century was transferred to Madrid and its surroundings. It is, in the words of Felipe Garín, ?a rare selection among Spanish collections?. It also includes two particularly important portraits by Goya of Martín Miguel de Goicoechea and Juana Galarza, his in-laws, and a drawing of the painter?s wife, Josefa Bayeu, which as the curator explained, citing Carducho, is a reflection of how ?drawing is the perfection of art?.

The 19th century takes centre stage in the fifth room devoted to European Naturalism. It spans a period from the middle of the 19th century until the 1920s, embracing an eclectic range of styles with works by Mariano Fortuny, Ramón Casas, Hermen Anglada Camarasa, Aureliano de Beruete, Santiago Rusiñol, Joaquín Mir and Joaquín Sorolla, who share the space with their contemporaries, namely Pierre Bonnard, Toulouse-Lautrec, Van Gogh and Amedeo Modigliani.

The sixth room, Picasso and His Contemporaries, houses fourteen works by Pablo Picasso, including oils, watercolours, pen and inks and pencil drawings, presided over by the exceptional Nu assis (Seated Nude). In dialogue with the Picassos, we find pieces by Braque, Léger, Juan Gris and Matisse, alongside two works by his contemporary, Salvador Dalí: Rostro invisible/ Ruinas con cabeza de medusa y paisaje (Invisible Face/Ruins with Medusa?s Head and Landscape) and the drawing Retrato del padre del artista y su hermana Portrait of the Artist?s Father and his Sister.

The last room, From Miró to Francis Bacon: History and Modernity, completes the exhibition. On one side of its two large walls hang 20th-century works by northern European artists, highlighting the international aspect of the collection: Edvard Munch, Gustav Klimt, Vasily Kandinsky, Paul Klee, Kees van Dongen, Egon Schiele and George Grosz. Facing them is an essential compendium of the long list of Spanish abstract painters from the second half of the 20th century: Antoni Tàpies, Pablo Palazuelo, and Manolo Millares.

Finally, on the remaining walls we find the works of Joan Miró, a key figure in 20th- century Spanish art. Opposite them is Mark Rothko?s canvas Black, Red and Black. Closing the show are masterpieces by Francis Bacon (1909-1992): an early piece, Composition (1933); his Study for a Portrait; the triptych with Three Studies for a Portrait of Peter Beard; and the spectacular 1983 Triptych.

Patronage at the Service of Art
CentroCentro Cibeles, headed by José Tono Martínez, operates according to the CCCB/Tate model, organising large temporary exhibitions alongside a diverse programme of shows, seminars, concerts, symposiums and other activities, centred on the city and its inhabitants, and on disciplines such as design, architecture, fashion and photography. In just three years it has become a key venue on the city?s cultural landscape and the third most visited institution on the Art Promenade, behind the Prado and Reina Sofía museums.

The Abelló Collection continues the ?Patronage at the Service of Art? series through which CentroCentro Cibeles has been attempting to bring some of the country?s most important private collections to the public?s attention since 2012. Other popular exhibitions have included El Legado Casa de Alba, the Helga de Alvear Collection: The Art of the Present, and the Masaveu Collection: From the Romanesque Period to the Age of Enlightenment.

Opening times and tickets
The exhibition runs until 1 March 2015, Tuesdays to Sundays from 10am until 8pm.

Tickets cost 6 euros, with a reduced rate of 4 euros for the over 65s, students, youth discount card holders, disabled persons and their companion, and large families and the unemployed with documentary proof of their status. There is a 20% discount on normal ticket price for groups of 15 to 25 people (?4.80).

Entry is free for children under 12, and all day on the first Tuesday of every month.

Alongside the show, CentroCentro is to provide a cultural mediation programme with guided tours of the exhibition on Tuesdays at 5.30pm and Saturdays, Sundays and bank holidays at 12 noon and 5pm. It is also possible to make bookings for groups of up to 25 people at different times. This programme will start in November.

In addition, a special programme of guided tours for primary and secondary schools is to begin, with free access to the exhibition.

All details available at:
www.centrocentro.org