Skip to main content
For one month, the promotional poster for the event is also on display on a hundred marquees on the streets of New York 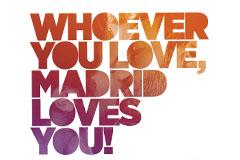 Madrid is ready to welcome World Pride, the largest international event for the LGBTI community, in 2017 and invites all of us to take part. Madrid City Council, through the Tourism Department of Madrid Destino, is launching a promotional video for World Pride Madrid 2017 and for Madrid as a LGBTI destination, which it will use in its marketing campaigns and on its social media sites to promote visits to Madrid during this event and reinforce the image of Madrid as a tolerant, diverse, fun and welcoming city.

The video is a marketing tool that is part of the promotional strategy for World Pride and is being developed by Madrid Destino to promote the image of Madrid in international markets around the celebration of what will be one of the largest events that the city has ever and will ever host. It will form part of a marketing campaign in Argentina, Mexico, Brazil, Colombia and the United States to promote visits to Madrid during the event (23rd June - 2nd July, when, according to the organisers, three million people are expected to attend).

The image of World Pride on the streets of New York
In tandem with the launch of the video, the Tourism Department of Madrid Destino is taking the promotional poster for World Pride Madrid 2017 to the streets of New York, which, as of yesterday and for one month, can be seen on a hundred marquees. This is the result of an agreement reached between the tourist offices of the two cities. The slogan used (?Whoever you love, Madrid loves you?) is the same as the video's.

Both the video and the poster are part of the promotional campaign for World Pride that Madrid City Council has been developing all year. The event has been promoted at countless Pride events, through press trips and at various tourist fairs where Madrid participates, such as the World Travel Market (WTM) in London, for example.

Madrid, committed to tolerance
Through the experiences of several people during the 2016 World Pride celebrations in Madrid, the video seeks to convey a very clear message about the city: ?Ames a quien ames, Madrid te quiere?/?Whoever you love, Madrid loves you? Madrid is not only one of the leading tourist and cultural destinations in the world, it is also a city that is characterised by its tolerance and diversity, where the whole world is welcome, whoever you are and wherever you are from.

This video, which lasts just over three minutes, uses a very visual, emotional language to portray a welcoming, incredibly friendly city where it is so easy to have fun, meet people and make new friends. It perfectly captures how Madrid celebrates World Pride, which has now become a great event throughout the city, in an atmosphere full of fun, tolerance and diversity.

Lesbians, gays, bisexuals, transsexuals, heterosexuals, families, and people of all ages and origins appear in the video and together enjoy this party that fills the main streets and squares of the city. It is an opportunity to celebrate, demonstrate and support diversity in a party atmosphere.

The stars of the video, a young man and a young girl who arrive in Madrid separately to attend World Pride, enjoy all of this and invite us to join them in their experience of the city of Madrid. The video is available on Madrid's official tourism website, esMADRID.com (http://www.esmadrid.com/en/madrid-lgbt), and on its YouTube channel (https://www.youtube.com/watch?v=SKh3T-Mw4ho&t=2s) /