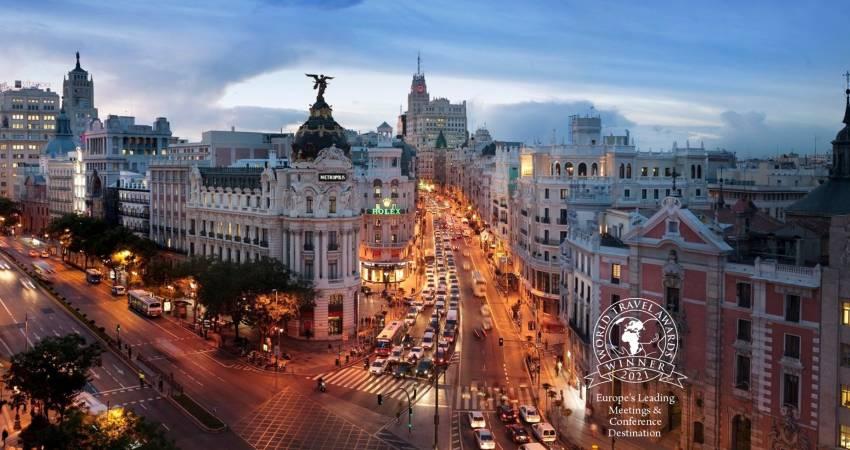 Madrid has been named Europe’s top MICE destination for the fourth year in a row. The Spanish capital took first place as Europe's Leading Meetings & Conference Destination 2021 at the 28th edition of the World Travel Awards, which enjoy great prestige in the industry and recognise excellence in its key subsectors year after year. Almudena Maíllo, the Councillor for Tourism at Madrid City Council, will convey the capital's gratitude for this new recognition at the virtual gala held today to announce the winners of the different categories in the European region.

The first year that Madrid won this award was in 2018. Since then, MICE (Meetings, Incentives, Conventions and Exhibitions) professionals from all over Europe have shown their confidence in the Spanish capital by giving it their vote at each edition of the awards, choosing it as the top city destination for major events. This time, Madrid was competing against 13 other destinations: Amsterdam, Athens, Barcelona, Berlin, Copenhagen, Frankfurt, Istanbul, London, Milan, Moscow, Paris, Porto and Vienna.

After cementing its position as Europe's top MICE destination, Madrid is now in the running to be re-named the World's Leading Meetings & Conference Destination at the Grand Final of the World Travel Awards on 26 November. It will be competing against the winners in the same category from the regions of the Middle East, Asia & Oceania, Africa & Indian Ocean, Latin America and the Caribbean & North America. Madrid received this honour in 2019 and again last year, leaving no doubt as to the quality and competitiveness of its MICE tourism industry.

This award also recognises the efforts and commitment of Madrid City Council and all of the companies and institutions that comprise the city’s tourism sector, in view of their resilience and determination to keep this segment -a key element of the tourism sector- going while maintaining the very highest quality and safety standards. Madrid was able to take swift action in the face of the new scenario resulting from the pandemic, ensuring complete safety for participants in the meetings it has hosted as well as the highest possible level of professionalism. The most recent example was the medical congress organised by the European Society for Radiotherapy and Oncology (ESTRO), which was held successfully in August and was attended by 2,200 people. Next week, Madrid will play world's best host again as it welcomes the World ATM Congress, the biggest global air navigation event, which will be held from 26 to 28 October at Ifema Madrid.

The Spanish capital is a leading city that offers not only compliance with all current safety guidelines and first-rate infrastructure and services for the organisation of professional events, but also an unbeatable range of cultural and leisure offerings. All of this potential and its commitment to key aspects in the new tourism era such as sustainability and legacy make Madrid a top MICE destination which meets the sector’s needs and expectations on every level.

Madrid City Council's Tourism Department, acting via Madrid Convention Bureau (MCB), continues to work to maintain and cement the city's leading position in the area of international MICE tourism. This segment is fundamental in the tourism model outlined by the capital in its 2021-2023 Strategic Tourism Plan, due to the characteristics of MICE visitors as well as their distinct impact on the entire value chain. Public-private partnership in this area is key in order to improve the city’s position, which is why MCB works in close cooperation with its network of over 200 affiliated companies and will be collaborating even more closely on new promotional and communication activities for 2022.

The companies associated with this municipal body will play an important and even more central role in the capital’s MICE tourism promotion strategy, as they are essential for keeping activity at 100% and building the confidence that professional organisers have in Madrid as a destination. The action plan foreseen involves initiatives aimed at mature target markets like the United States and Europe as well as developing markets like Latin America and China. This includes attending international and professional fairs and holding presentations in the destination. Priority will be given to all actions that take place in the city such as internally-organised fam trips or providing support for professional events with an interest in the Spanish capital, as they enable first-hand knowledge of Madrid’s resources to be gained through personal experience. Sustainability and legacy will play a key role in each and every one of the initiatives that are implemented./